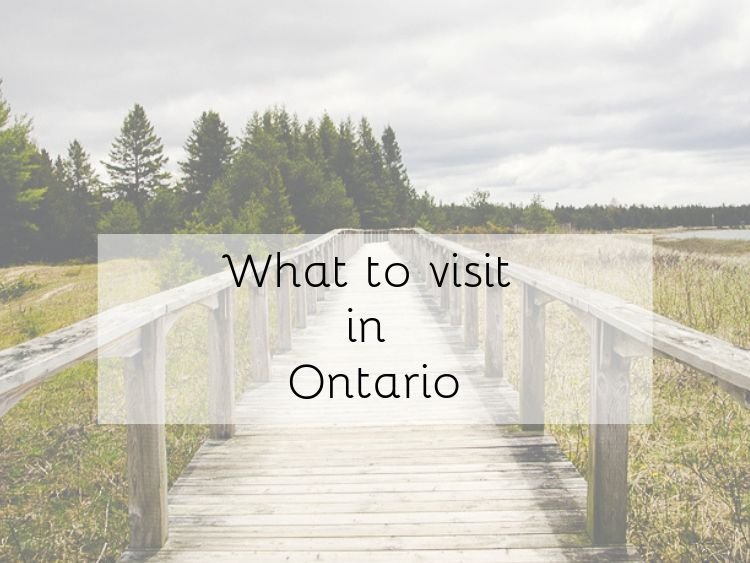 What to visit in Ontario

Over 250,000 lakes, endless forests and two time zones. Ontario is the second largest province of Canada. It has an area that is larger than France and Spain combined. About 40% of Canada’s population lives here, which makes it the most populated part of Canada. There are 5 national parks and over 330 provincial parks. This makes Ontario not only diverse, but also as a place which has a lot to offer to visitors. Here are the places worth to discover in Ontario.

Back in 2007, CBC Television announced a competition for the Seven Wonders of Canada. In voting audience could vote for one of the more than 20 000 places nominated. The Sleeping Giant beat Niagara Falls and the Rocky Mountains. This huge rock formation at Lake Superior resembles the shape of a sleeping giant. According to the legend of the native Ojibway people, Sleeping Gianat is Nanabijou, who was turned into a rock after revealing the location of the secret silver mine to a white man. The fact is that the place offers more than 100 km of trekking trails, including a more than 20 km ones to the top of the Sleeping Giant. The view from above is worth hiking about 300 m altitude. 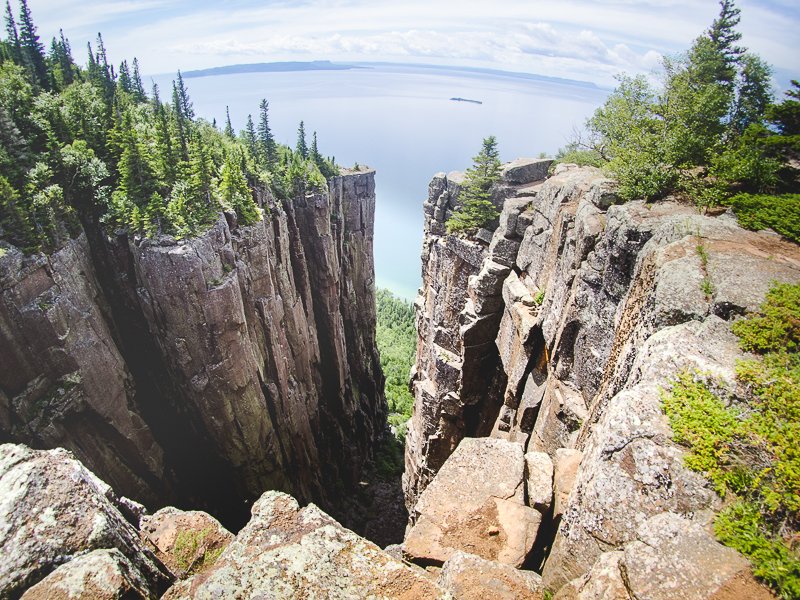 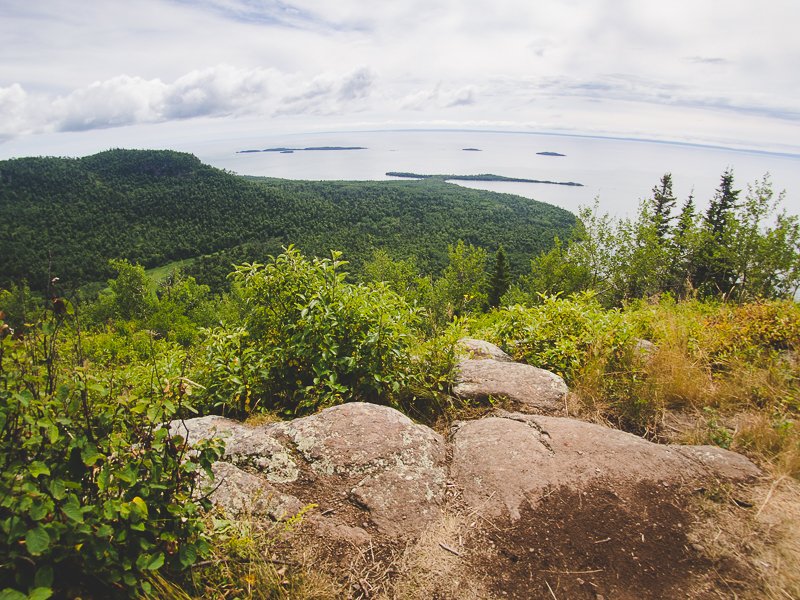 I think Manitoulin Island will always be for me associated with a place where time slows down and sometimes stops completely. Everything because of people I stayed there with. A couple from Russia chose this place to get away from the hustle and bustle of everyday life. No internet, TV, food from the garden, and next to their home a gravel road, which is called the “Amish highway”. Time passed there on talking without checking phone every 5 minutes. Manitoulin Island itself is the largest freshwater island in the world. During the season, it is a popular destination for Toronto residents who run away from the tiring city. 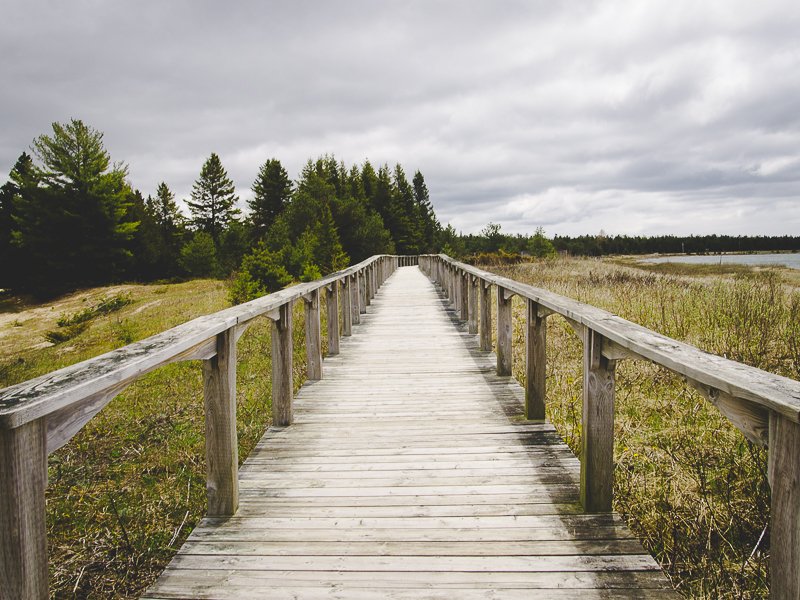 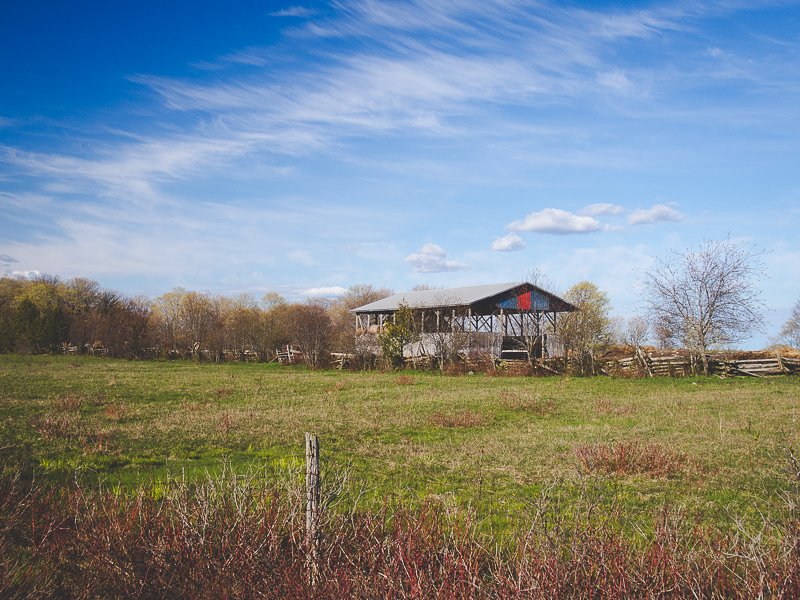 It is worth visiting the beautiful Bridal Veil Falls, hiking the Cup and Saucer Trail, which offers a view of the entire island or spend a day at Providence Bay beach. Every year at Manitoulin Island, the Wikwemkoong Annual Festival and Traditional Powwow Festival is held, a gathering of representatives of various tribes of Native Americans. It is a great opportunity to learn more about their culture, listen to traditional songs or try a typical cuisine. Such festivals take place all over North America. Here you can check when and where. 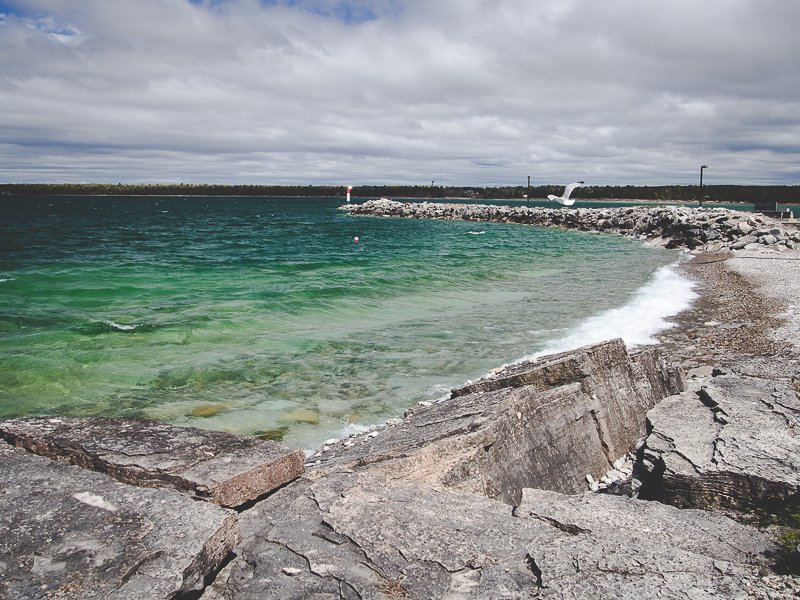 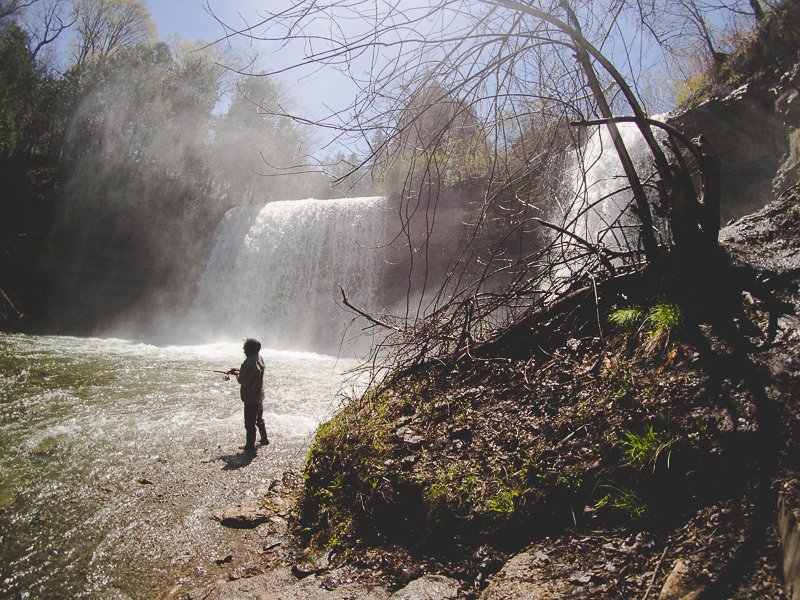 Located in the Niagara Escarpment Biosphere Reserve Bruce Peninsula National Park and the nearby Flowerpot Island are absolutely stunning. Beautiful cliffs, turquoise water of Georgian Bay and diverse flora make trekking in such a place a unique experience. You can read more about the Bruce Peninsula park here. 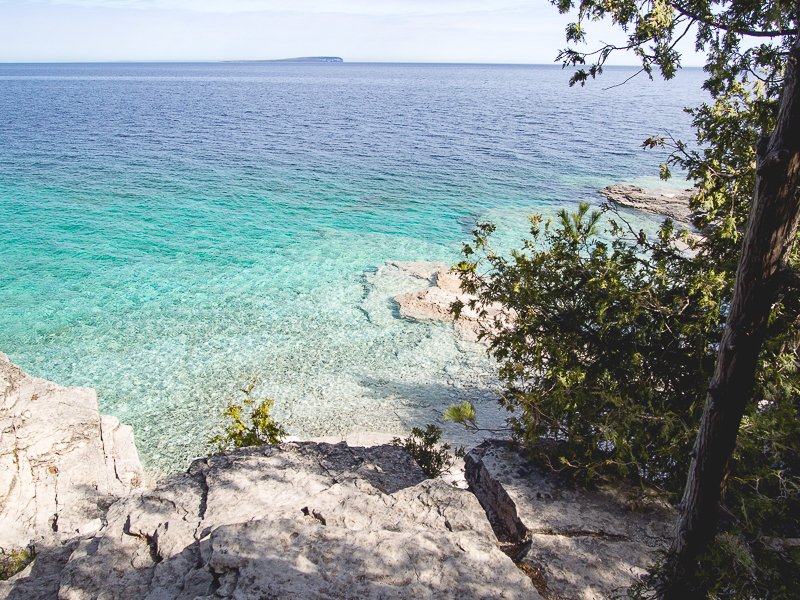 Just an hour and a half from Toronto is the charming town of Elora. It is known mainly for its 19th-century limestone architecture and the beautiful Elora gorge. The canyon carved by the Grand River offers beautiful walking trails that give you the opportunity to enjoy the more than 25-meter cliffs of the gorge. Close to Elora beautiful Elora Querry is located. This turquoise water filled former limestone quarry is a popular place among the locals to rest by the water. Surroundings of Elora and nearby St. Jacobs are populated by Mennonites. The social and religious movement established in the Netherlands in the 16th century is characterized by a modest and traditional way of life. You get the impression that time stopped for them in the sixteenth century. They arrived in Canada in 1786 from Pennsylvania, currently around 60,000 Mennonites live in the whole of Ontario. 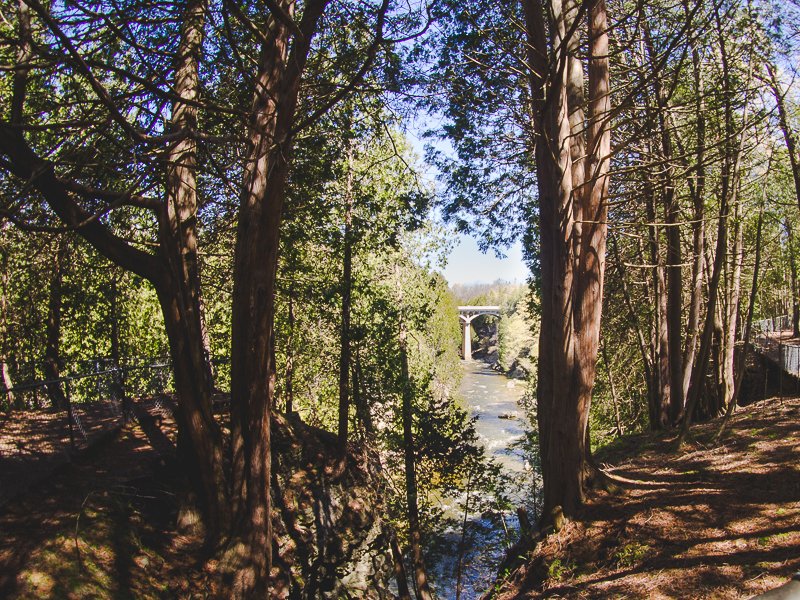 The port city of Hamilton is an ideal place for every waterfalls lovers. In Hamilton, as well as in the immediate surroundings, you can find more than 100 of waterfalls. Most are located in the area through which runs the Bruce Peninsula Trail, about which I wrote here. Waterfalls that are worth seeing are Albin Falls, Tews Falls, Webster’s Falls and Tiffany Falls. Hamilton is about 1 hour away from Toronto. You can check the connections on this page.

Niagara Falls is located on the border between Canada and the USA. It is arguably the most popular natural attraction in Canada. In fact, it consists of three waterfalls. American Falls and Bridal Veil Falls are on the American side, Horseshoe Falls on the Canadian side. The last one is the largest, about 53 m high, 790 m wide, and the amount of water that flows through it for a minute could fill over 60 Olympic swimming pools. It is the perfect place for a day trip from Toronto. Travel by bus takes about 2 hours, similarly by train. Please note, Niagara Falls itself is like mini Las Vegas in the States. It makes this place very touristy and it is better to visit Niagara falls out of season. 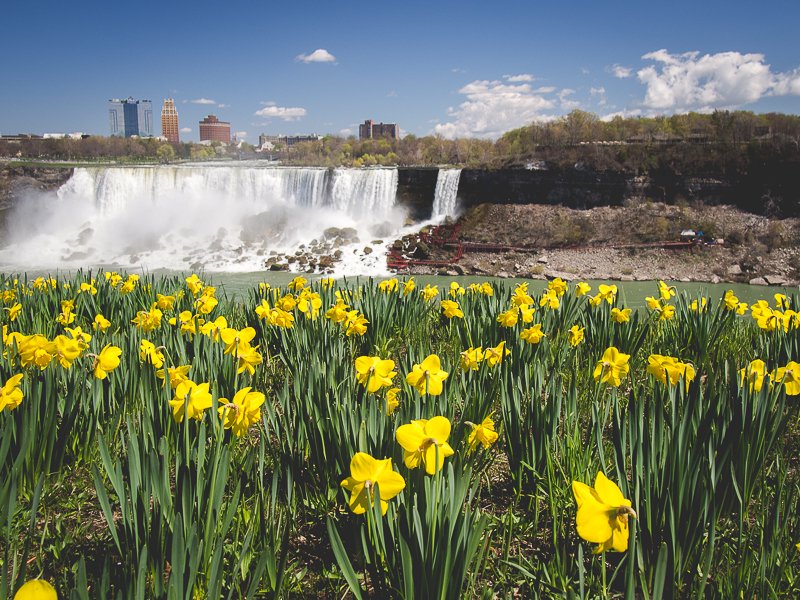 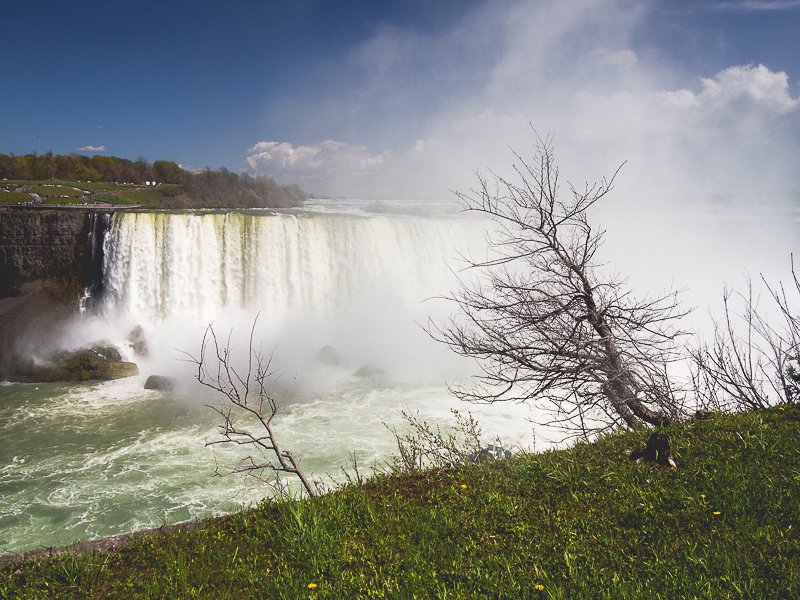 This oldest Ontario provincial park is located between the Ottawa river and Georgian Bay. Its name comes from the Algonquin tribe, one of the first Nations of America. Huge space, lush forests, thousands of lakes and more than 1,200 km of streams and rivers make this place created for almost every possible activity. From hiking through numerous trails, horse riding, cross-country skiing, fishing, cycling, to canoeing, rafting and wildlife observations. And there is lots of to observe here. In the park you can find foxes, deer, wolves, bears, numerous species of birds and moose, which are easy to see especially in the spring. The park is also an ideal place for night observing the sky. Algonquin Park is about 300 km from Toronto, about 260 km from Ottawa. It is worth visiting the park in autumn, when numerous maple trees, oaks and birches change color.

Near the park is the village of Bancroft, which is considered the Mineral Capital of Canada. In this small town there are up to 1,600 different types of minerals, which makes it a paradise for every rockhounds. 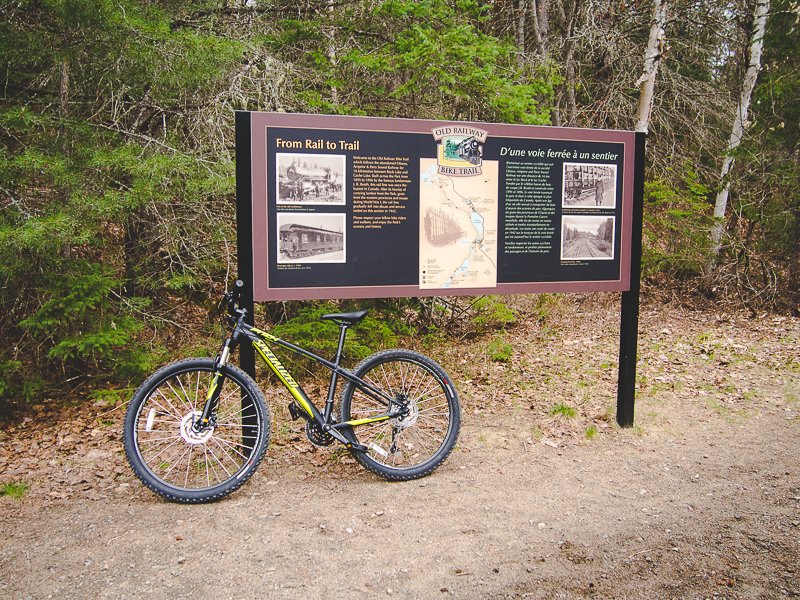 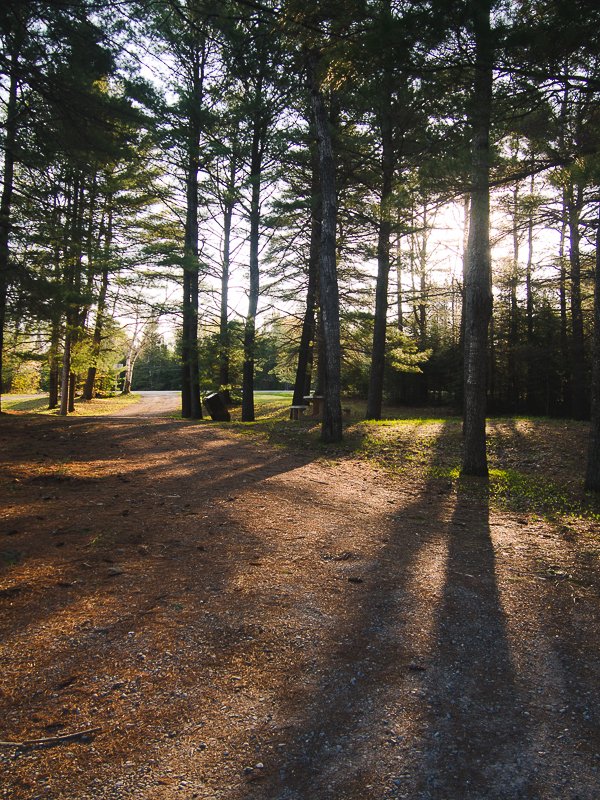 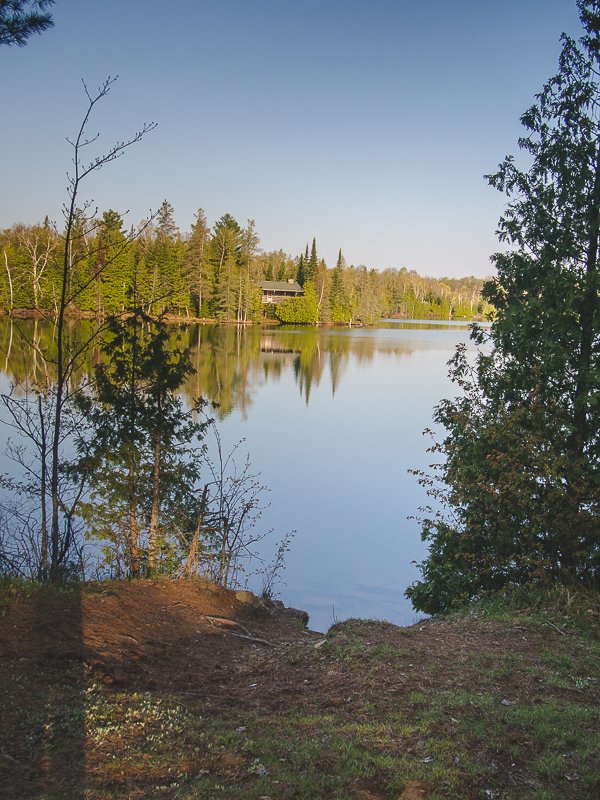 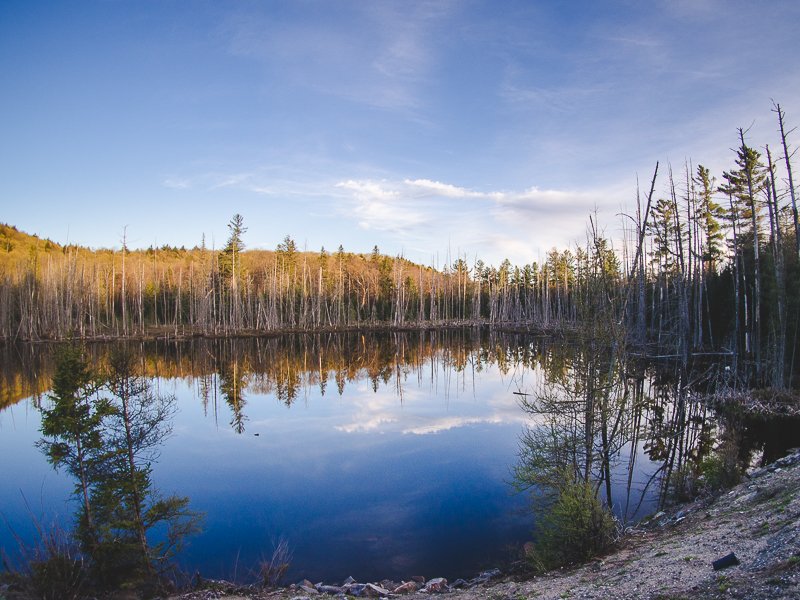 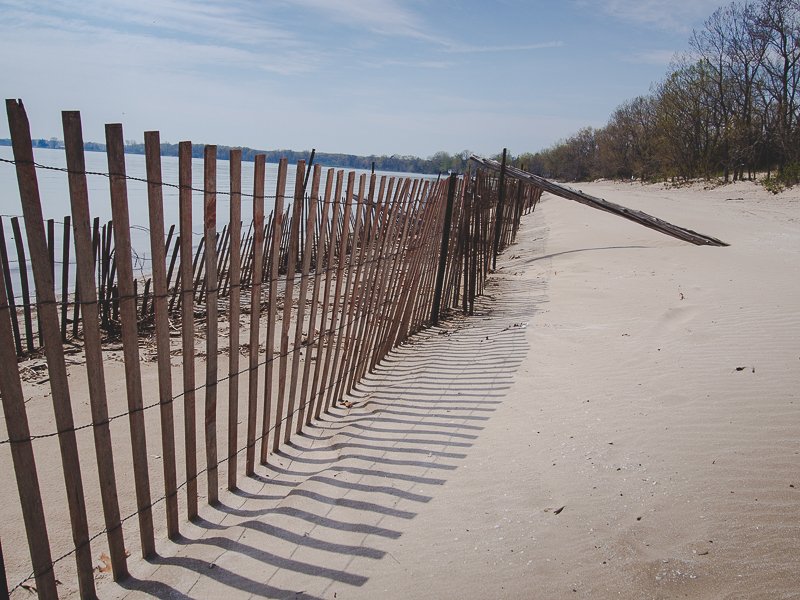 Lake on the Mountain

Lake on the Mountain is located in Prince Edward County, about 62 m above Lake Ontario. This mysterious lake has been the subject of numerous speculations for centuries. All because of the flow of fresh water without a clear source of its origin. Mohawks called Lake Onokenoga, which means nothing more than the Lake of Gods. They believed that spirits dwelled in the depths of Lake on the Mountain and offered them gifts each spring, to ensure a successful crop in the coming year. Others believed that the lake is bottomless. For many years geologists have tried to explain the phenomenon of Lake on the Mountain. The most likely theory is that it is collapsed doline filled with water. 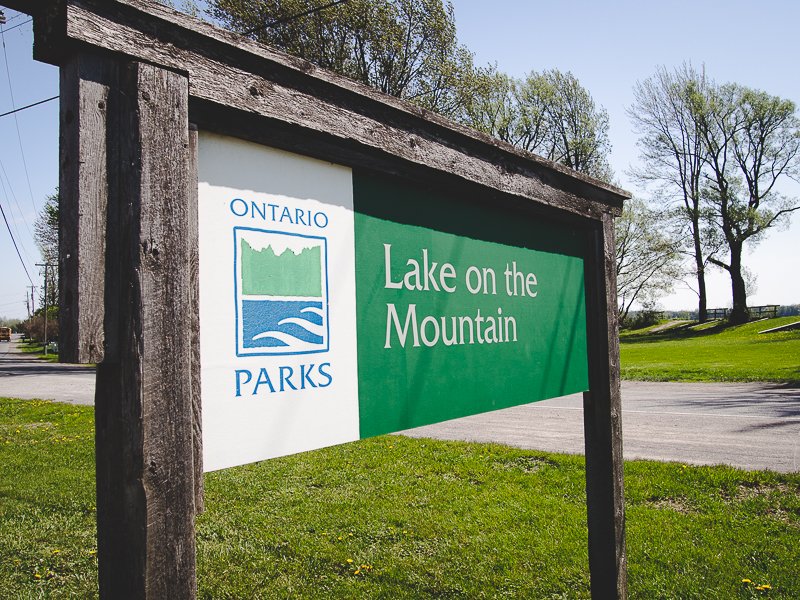 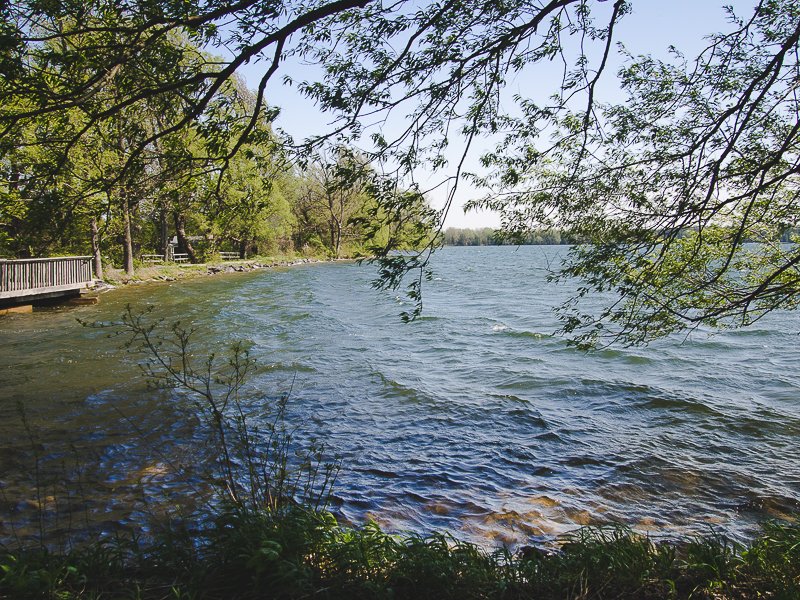 On the border with the US, on the St. Lawrence River is a unique place — Thousand Islands National Park. This unique area contains over 1,800 unique islands of various sizes. The largest of them is Wolfe Island and the smallest Tom Thumb. It is worth going on a canoe trip or a boat to admire this amazing archipelago. A Thousand Islands National Park is located 3 hours from Toronto, 1.5 hours from Ottawa and 2.5 hours from Montreal. 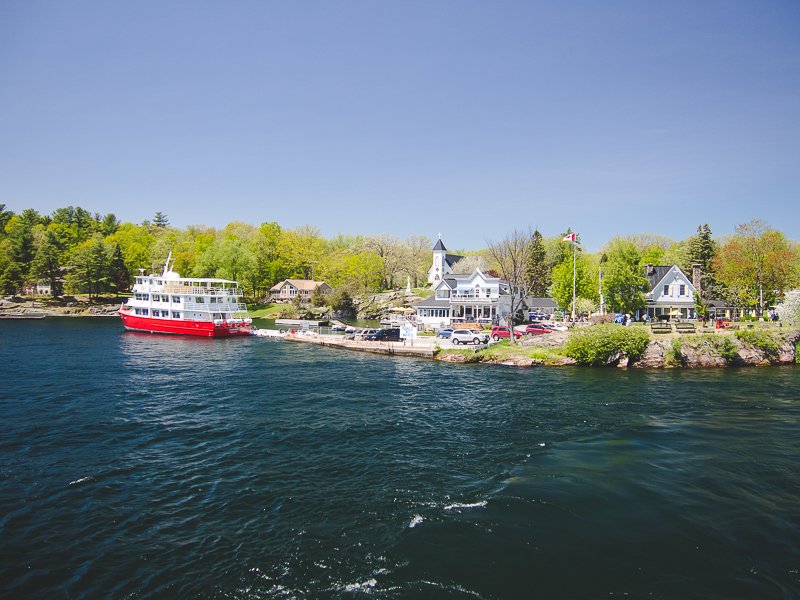 Of course the above list doesn’t exhaust all places which are worth to see in Ontario. There is much more to discover there. Toronto is great starting point to explore most of the mentioned above places. Especially that it is very easy to find some cheap connection there.

Have you ever been to some of those places or maybe do you have some other recommendations? Let me know in the comments below:)

My half a year trip to Canada 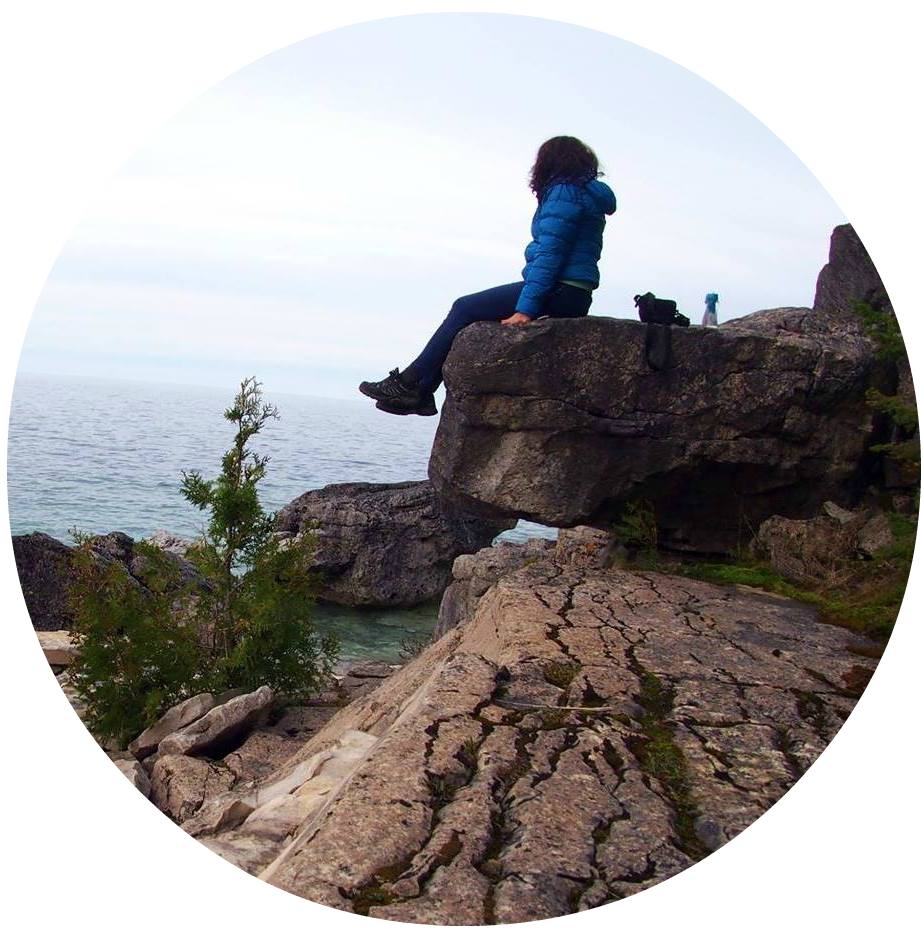 Hi, my name is Aga. Welcome to my blog Aga Out Of Office. I’m glad I can share with you my biggest hobbies which are travels and mountains.

[PL⤵️] It's just amazing how much water flows

Have you every been on the journey which has chang